How Common Is Alzheimer's?

Posted by Monica Heltemes on 11/1/2017 to Dementia Awareness
November is Alzheimer's Awareness Month.  Throughout the month, we will be sharing things that will help you to understand more about this disease, to help both people living with the disease and caregivers. To start, let's look at how common Alzheimer's is, including the impact of age and gender.
The Alzheimer's Association Facts and Figures report for 2017 shares the in-depth statistics about Alzheimer's disease and other related dementias. Some of the key stats include:
The statistics are sobering. I can personally attest to the point that the older a person is, the more likely they are to develop Alzheimer's disease from my occupational therapy practice with older adults.  Although not formally tracked, it was pretty evident when most of my age 85+ patients would have at least a mild cognitive impairment when given a screen test.  This was not just forgetfulness of "old age" but forgetfulness that led to mistakes or confusion.
Research is working hard to figure out how and why people develop Alzheimer's disease.  Is it what we eat? Our environment? Our lifetime level of stimulating our brain? Our level of physical activity?  Unfortunately, there is not one singular identified cause, but rather a mix of many variables. That is what makes developing treatments so difficult.
For now, some of our best defenses is simply learning what Alzheimer's is - and isn't - and how to best help affected people to live their best days despite the disease.  Keep reading our Alzheimer's Awareness series of articles to become educated and empowered.
Get articles like these, plus helpful tips straight to your inbox. Click below:
Previous Post
Next Post
I Still Enjoy A Good Laugh! Book

A Caregiver's Guide to Dementia and Behavioral Symptoms 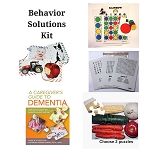