The 5 A's of Alzheimer's Disease: Apraxia

There are five A symptoms seen with patients with Alzheimer's disease: Anomia, Apraxia, Agnosia, Amnesia, and Aphasia. This is part two of five about these symptoms and discusses Apraxia.  Apraxia is due to damage in different parts of the brain, including the parietal and frontal lobes. 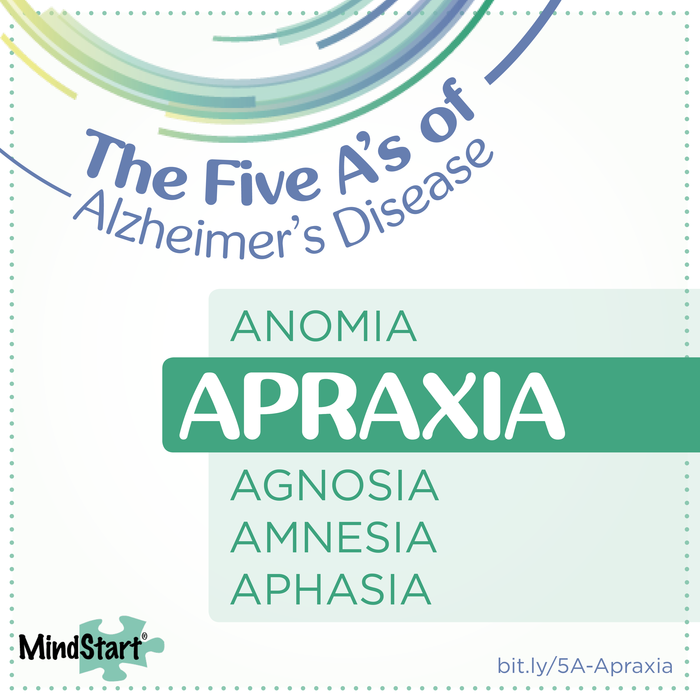 Apraxia - A Misfire in Movements and Object Use with Dementia

Apraxia is a difficult phenomena to explain. In fact, when looking for more information on this problem, I found little research on this symptom in Alzheimer's disease. There are actually many types of apraxia (ideomotor, ideational, verbal, constructional. etc.) but for the sake of easier understanding, this article will speak of apraxia in general terms.

In general terms, apraxia happens when there is a disconnect between the idea of doing a task and the execution of actually doing that task.

The person has the intent to do the task and the muscle strength to do so....but just does not receive the right brain messages in coordinated fashion to make it happen.  Here are some examples:

Apraxia can also make the person do things out of normal sequence or to use objects incorrectly.  For example:

So how can a caregiver help the person who is experiencing apraxia? Try these tips:

Use modeling to help the person get through the task or guidance of your hands/arms over theirs.

-Show how to button the shirt then have him or her try to do it.
-You put your arms around the person to almost dance, as you help guide the person's body to align to a chair.
-Demonstrate how to chew and tap the person on the mouth, to help them get going on chewing their food, in later stages.

Put similar looking items, that might get confused, hidden away in common used areas like the bathroom or kitchen table.
-Hide things that might look like a tube of toothpaste and that might be used by accident, such as ointments and denture adhesives.
-Set out only the correct 'item' for the job. For example, when having a bowl of soup, set out only the spoon (not the fork and knife, which might accidentally be tried for eating the soup).
-Set out items in the proper sequence. If you are setting out clothes to dress in, for instance, stack them with the underclothing on top, shirt and pants in the middle, and socks in the last layer.  Note, you may need to help ensure all old clothes come off first before moving to this step to dress.

With this better understanding of the symptom of apraxia in Alzheimer's disease, the caregiver can better prepare for it, manage it, and minimize frustrations it might cause for both the patient and caregiver.

Read about the first 'A' symptom of Alzheimer's disease: Anomia