Posted by Monica Heltemes on 9/26/2016 to Dementia Education
September is World Alzheimer's Month™, an international campaign to raise awareness and challenge stigmas about dementia, which affects millions.  It unites people with dementia, caregivers and family, medical professionals, researchers and advocates from all around the world. The campaign is an initiative of the Alzheimer's Disease International, which also releases a yearly World Alzheimer's Report. 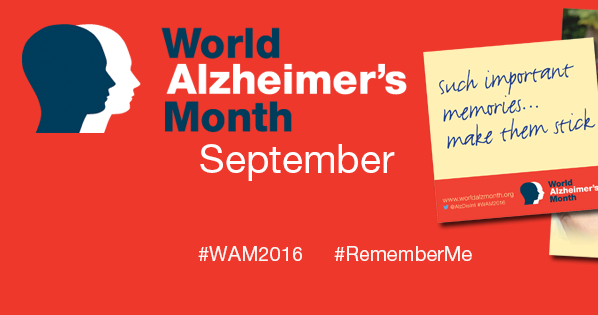 Dementia - Related Events Around the World

There have been thousands of activities across 36 countries this month, including:
Alzheimer's Disease International identifies a common goal to help the person live their life with dementia:
"The goal of 'living well with dementia' is achieved when care is person-centered, seamless and coordinated, and when the needs of people with dementia, and their caregivers, are anticipated and met in a timely fashion throughout the course of the condition."
People living with dementia, are LIVING - not fading away!  Having better access right from the start, with a timely diagnosis and education for the person and the family, then followed by ongoing support from family and friends, who do not turn away due to stigma, combined with appropriate support from health care providers,  will allow the person with dementia to continue living life as best as possible.  In honor of World Alzheimer's Month, share your messages about dementia or this article with the hashtags #WAM2016 #RememberMe. Together, we can make a difference!
Want a visible way to start conversations about dementia, to reduce stigma and increase understanding? Check out our 'The Heart Does Not Forget" t-shirts and wear it to honor those living with dementia.
Previous Post
Next Post

Heart Does Not Forget T-shirt